Psyllium, popular as Isabgol or Isphagula (Botanical name—Plantago Ovata Forsk), and mainly grown in India was popularised with the advent of Arabians and Persians in India as early as 10th Century A.D. under the popular name of Fleawort or Flea Seed Husk.

Its use as a mild bulk laxative spread to the United States and other European countries during middle of 19th century and increased substantially later on. Psyllium has maintained an important place in therapeutics despite the development of many newer synthetic compounds.

In indigenous medicine, Ayurvedic and Unani, the seeds and husks are used as an emollient, demulcent and laxative, and in the treatment of chronic constipation, amoebic and bacillary dysentery, and diarrhoea.

The efficacy of Psyllium is due to the dense mucilage, the action of which is purely mechanical, as the husk swells into a jelly-like mass in emulsifying with liquids.

Recent advanced research carried out in the United States and elsewhere shows that Psyllium Husks used as a dietary supplement has helped lowering the human serum cholesterol level.

In India the major cultivation areas are the plains of Gujarat, Rajasthan and Madhya Pradesh.

The following grade of Husks are commercially marketed by us in bulk quantities. If you have any specific requirement please Contact us. 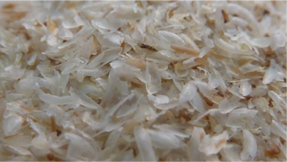